‘Wilson Pickett Obituary’ – by Keith Woods, from ‘Tales From The Woods’ 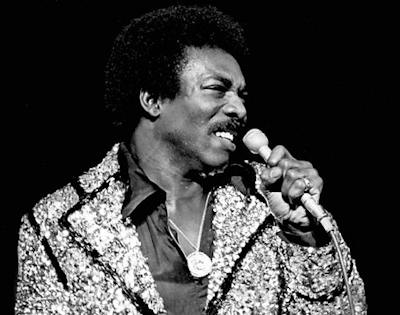 There are soul legends and then there was the Wicked Pickett, a major giant of soul music. His career spanned four decades, and was considered to be the equal of such great soul men as Otis Redding, Sam Cooke and Bobby Womack. He was defined by his raspy voice and passionate delivery, which introduced the aggressive dominant rhythmic style to soul music.

Born 18 March 1941 in Pratville, Alabama, the youngest of eleven children. Pickett was brought up on a stable diet of Gospel music. Pickett got his start singing in his Grandfather’s, who was a Baptist minister, church choirs. In his mid teens he moved to Detroit to live with his father, where he continued his musical grounding, singing Gospel music with a number of spiritual groups, the Gospel harmony group the Violinaires being one. His reputation spread, finally coming to the attention of the then leader of the Falcons, Willie Schofield, who were hot with the seminal soul wailer ‘You’re So Fine’ on Unart Records. Late in 1961 Schofield called on Pickett to join the group.

The Falcons had moved onto Robert West’s Lupine label, and in early 1962 Pickett makes his recording debut, singing lead vocals, with the righteous ballad ‘I Found A Love’. Pickett’s Southern Gospel wailing combined with Robert Ward’s sanctified piercing guitar, and hallowed sanctified group harmony saw this pure church sound sweep up the charts to top ten R&B.  A further couple of Lupine singles were similarly raw in sound, but lacked the distinctive cohesion of the hit and fell by the wayside.

Graduating from the Falcons he embarked on a short lived solo career. His first solo release on Correc-Tone Records, ‘Let Me Be Your Boy’, was a best forgotten messy offering, and he soon high tailed back to the Falcon’s nest, whom had now signed for Atlantic Records, joining up with future soul notables Eddie Floyd, Joe Stubbs, Sir Mack Rice and Ben Night for the rest of 1962, whence ‘Take This Love I Got’ was a notable searing lilter.

Still having aspirations to be a solo artist he again tried his luck by signing in early 1963 to Lloyd Price’s Double L Records, debuting with the classic slow burner ‘If You Need Me’, a wailing revelation which began to ascend the R&B charts before competition with Solomon Burke’s Atlantic cover version stopped Pickett’s record in its tracks. He promptly released another self-composition with the indispensable revered ‘It’s Too Late’, which reached the R&B top ten and fifties pop. He followed up with another intense outing in ‘I’m Down To My Last Heartbreak’.

With the demise of Double L he once again hooked up with Atlantic in 1964 as a solo artist. His first couple of releases flopped, but a visit to Memphis in May 1965, linking up with legendary soul producer Jerry Wexler yielded plastic dynamite. Rolling drums and chugging horn riffs set the scene for the loping backbeat and rasped vocals, on the acknowledged immortal ‘In The Midnight Hour’, which topped the R&B charts and went onto become an international pop smash, going down in history as one of the all time great soul records.

This set the scene for some thirty odd subsequent R&B/Pop hits on Atlantic over the next eight years, turning out hits at assembly line speed, which were often recorded with the cream of the session musicians in Memphis and Muscle Shoals, including the elephantine ‘Don’t Fight It’, the Eddie Floyd penned telephonically titled ‘634-5789′, the gutsy ’99½ (Wont Do)’, Mack Rice’s ‘Mustang Sally’, which became his biggest cross over, a revival of Chris Kenner’s soul anthem ‘Land Of A 1000 Dances’ “na na na”, and in late 1967 Dyke & the Blazers ‘Funky Broadway’. He teamed up with Bobby Womack in 1968 for ‘Midnight Mover’ which was another top ten R&B hit. His last big hit record was in 1972 ‘Fire and Water’. He closed out his Atlantic era with the top thirty R&B hit ‘International Playboy’.

Pickett then found his career in decline after the advent of disco. Moving to RCA in 1975 and placed under the wings of Brad Shapiro and Dave Crawford who pushed Pickett towards a more Pop slanted recording package. Three RCA albums, along with a handful of singles only moderately clicked, the flurry of hits were over.

1975 saw the inception of Pickett’s own Wicked label, which apart from a minor hit with ‘Best Part Of A Man’, the Wicked label had minimal success as was the case on his next venture to Erva Records. Later for a short period he worked alongside Joe Tex, Don Covay, Ben E King and Solomon Burke in a revamped Soul Clan.

Although he was inducted into the Hall of Fame in 1991, the nineties were troubled times for Pickett. He struggled at various times with drugs and had several brushes with the law relating to drug offences. He was arrested for allegedly yelling death threats while driving a car over the mayor’s front lawn in Englewood, New Jersey. He was then charged with assaulting his girlfriend. He was given two years probation and fined $1,000 for carrying a loaded shotgun in his car. Further arrests followed and in 1993 he was sentenced to a year in jail after hitting an 86 year old man while driving under the influence of drink.

In 1991 his songs were introduced to a new generation when they were extensively featured in the film THE COMMITMENTS. His first album in more than a decade was released in 1999, the aptly titled IT’S HARDER NOW. On ‘Soul Survivor’ “I remember 1965” he sang “Everyone was still alive, I’m a soul survivor”. The album was honoured with a Grammy nomination for best traditional rhythm and blues vocal performance.

In December 2004, ‘Mustang Sally’ and ‘In The Midnight Hour’ were included in Rolling Stone’s magazine list of The 500 Greatest Songs of All Time. He continued to be active touring, including large festivals, until about a year ago when he began suffering from health problems. He died after suffering a heart attack on 19 January 2006.