‘Tyrone Davis Obituary’ – by Keith Woods, from ‘Tales From The Woods’ 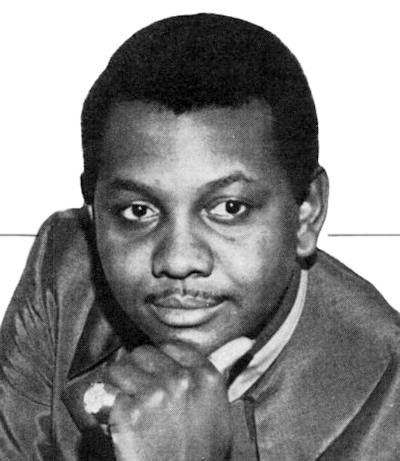 Having sold millions of records over the last few decades, Davis had to rank as one of the all time greats of soul, his track record equalled by few in the business. Between 1968 and 1988 he had altogether forty three singles on the R&B charts, including three number ones.

Tyrone Davis was born Tyrone Fettson in Greenville Mississippi on May 4 1938. When he was a year old, his parents divorced. His father moved to Saginaw, Michigan, taking baby Tyrone with him. As a teenager at Saginaw Central High, he did what a lot of young kids in the fifties did, he sang on street corners and entered school talent contests. He also married at a tender age and in 1959 he and his family moved to Chicago’s West Side.

The entertainment field always beckoned Davis. After an assortment of odd jobs in the early sixties he somehow insinuated himself into Freddy King’s entourage as valet and chauffeur. By 1962 after splitting ties with King he was back in Chicago working in a steel mill.

Davis finally broke into recording in 1965 through Harold Burrage, who had become Davis’s friend and mentor. Davis had started performing in some Chicago clubs, Burrage was impressed after catching a Davis performance at a club on the West Side. Burrage came to Davis with a song he had written ‘Suffer’, a bluesy mid pacer, which he recorded, and was released on Willie Barney’s Four Brothers label as Tyrone the Wonder Boy, which achieved a little local success. He went to work for Barney in various capacities. Davis had three releases for Four Brothers, the best and most successful was ‘Please Consider Me’ in January 1967, which was a substantial local hit. That same year he next appears with one release on Monk Higgins Sack label, the up tempo ‘I’m Running A Losing Race’. In 1968 ‘What If A Man’ was released on ABC Records. Until now Davis had made only a local impact on record, but was making a reasonable living from the Chicago club scene.

In 1968 Davis made his big break. Carl Davis was vice president for Brunswick, founded his own Dakar label, a subsidiary of Brunswick. ABC A&R man Barry Despenza and Davis got together and laid down some demos. Re-recorded these demos result in his first release for Dakar, the two sided masterpiece, ‘A Woman Needs To Be Loved’/ ‘Can I Change My Mind’. Once the record had been flipped it eventually hit gold, selling almost two million copies.

Davis left the crumbling Brunswick organization, but having just enjoyed a number one R&B hit he really didn’t have any difficulties in finding a new recording home. Davis was picked up by one of the majors, Columbia in 1976. His first release for his new label was a monster, the joyous disco lifter, ‘Give It Up (Turn It Loose)’, which was also his last big cross over hit.

By the mid seventies Davis was at the peak of his career. After another smash, where he completely surrendered to disco with the repetitive, ‘Get On Up (Disco)’, Davis made a radical change in direction. Instead of up-tempo numbers, and flirting with disco, he mellowed down, which was rewarded with one of his biggest hits in February 1979 with the slow moody atmospheric ballad ‘In The Mood’, soul at its tasty laid back best. Davis failed to follow up with any more significant hits for Columbia.

In 1982 dropped by Columbia he joins Highrise records and once again hit the higher fluxes of the R&B charts in early 1983, with the hooky beat ballad ‘Are You Serious’. Highrise closed down and he joined Ocean Front records in late 1983, a couple of minor hits. Along with Leo Graham they formed their own Future label in the mid eighties, which lasted a couple of years. Alas the releases were small budget jobs and achieved no real success.

After approaching and being rejected by Malaco records in 1991 he reluctantly joined John Abbey’s Ichiban records. His first Ichiban album I’LL ALWAYS LOVE YOU was a great success and stayed in R&B album charts for over a year. Three more albums and eight singles were not so fruitful though. After Ichiban Davis joined Al Bell’s Bellmark label in 1994 which seems to be a one off album deal FOR THE GOOD TIMES.

He finally made it to Malaco in 1995 where he continued to record, and chart, now releasing bluesier material. He remained a huge draw on the festival and Southern soul black club circuit. He suffered a stroke on the 7 September 2004, from which he never recovered and died February 9 2005 of pneumonia.