‘Bobby Moore Obituary’ – by Keith Woods, from ‘Tales From The Woods’

Bobby Moore and The Rhythm Aces 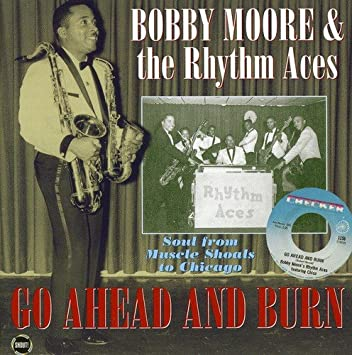 A native of New Orleans he was born in 1931. Generally very little is known of his early life, until around 1952, when in Fort Benning, Georgia, along with a few fellow soldiers he formed his first Rhythm Aces. When Moore’s army regiment was transferred to Germany, he studied music seriously in an army band school, where he learnt to master the tenor sax, openly heavily influenced by the sound of Ray Charles.

His career is patchy until he arrived in Montgomery, Alabama in 1961 where he formed a new group, which for sentimental reasons he called the Rhythm Aces, this time going out on the road as a full time musician.

In no time the cocktail lounge band became very popular around the local Montgomery clubs, always in great demand, and playing on many successful tours as a local support act, backing such headline singers as the likes of Etta James, Wilson Pickett, Sam Cooke, Otis Redding, Mitty Collier, Kim Weston and many others. Gradually the group began to grow in status and in 1966 Moore added vocalist Chico Jenkins to his distinctive tenor sax. The band eventually secured a contract with Chess records, which results in their debut record.

Chess Records were experiencing a lull around this time, but it hadn’t gone unnoticed that producer Rick Hall was already winning recognition for his FAME recording studio down in Muscle Shoals, Alabama, with big hits by Otis Redding, Percy Sledge, Arthur Alexander under his belt. In the hope of revitalising its fortune, Chess felt the Muscle Shoals studio was an ideal environment in which to record some of its acts. 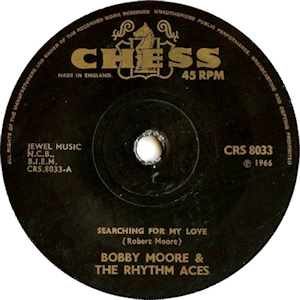 Bobby Moore and the Rhythm Aces were the first Chess act to take this route. It proved to be a winning formula for Bobby. His self penned composition, ‘Searching For My Love’ was an instant cross over smash hit, reaching twenty seven on the pop charts and climbing to seven R&B. The record needs no introduction, its catchy rhythmic horn swing, Jenkins supplicated torn up lead vocals, and repeated hook ” I’ll never, never let her go, no no no..” has to be one of the all time sixties soul moments.

The tracks cut at the Muscle Shoals sessions made up the album SEARCHING FOR MY LOVE which followed the hit single were all Moore originals, and are a mixed bag of styles, a pulsating ballad in “Mr Starlight”, a pleading deep soul ballad in ‘How Can You Do It Baby’, being the highlights to these ears.

December 1966 sees the follow up ‘Try My Love Again’ with Jenkin’s superb gritty vocals to the fore, but could only reach mid table on the R&B top hundred, and just nibbling the pop charts at ninety seven. Their third single, ‘Chained To Your Heart’, and final R&B chart entry, struggled to peak at forty nine.

After this the Rhythm Aces failed to maintain chart status, with Chess releasing its last record on the group in 1970. But before then they had already drifted back to steady bookings on the lounge and cabaret circuit around the Southern states of America.

A single release by a Bobby Moore and The Rhythm Aces ‘Call Me (Your Anything Man)’ appeared in August 1975 at the height of the disco era on US Scepter Records, also out on Pye in the UK. Featured in the Soul Kitchen’s legendary random dip way back in issue 8. I said then, A beautiful mid tempo laid back soul sound, that is slightly reminiscent of Johnny Bristol’s ‘Hang on in there baby.’ The type of soul sound that sounds as fresh today as it did back in 1975. B side is an extended disco version with even more of the haunting vocals from the lead vocalist of the time.

Over the decades his musical pedigree and popularity as one of the finest party bands had kept him in regular work. One of his final performances was opening for top country music group Alabama at a benefit for the victims of Hurricane Katrina.