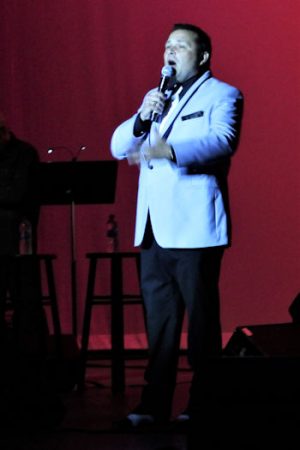 Good things come to those who wait. After a worldwide pandemic postponed promoter Todd Baptista’s annual Doo Wop Extravaganza (this one titled Doo Wop XVIII: The Hitmakers) for a year-and-a-half, fans of early R&B/vocal harmony were treated to a three-hour show at the Zeiterion Performing Arts Center in New Bedford, MA on Oct. 16. And the stars did not disappoint.

Three of the four acts featured original members from their 1950s and early 1960s heyday. The Majors (“A Wonderful Dream”) kicked off the festivities and original bass member Ron Gathers looked like the Energizer Bunny out there – at 82. His steps during his group’s set seemed to have more pizazz than his younger counterparts.

“It’s the difference between living it and singing it,” noted Claire Lineberry, who assists with Bill Clark’s Musical Heaven radio show on 95.9 FM every Sunday night.

Asked to pick her favorite moment of the four-act show, which included 26-year-old Kid Kyle, a young man who has clearly studied the old masters, she said it was when Gathers came out with a red wig and played the part of the female subject of the group’s final song of the night, “She’s a Troublemaker.” He danced comically to the delight of everyone, blowing kisses as the female subject on stage.

“It added a little humor at a time when we’ve all been so serious over COVID and everything,” said Lineberry. Singing lead for the Majors is Frank Troutt Jr., whose father was in the original line-up. However, Troutt Jr. fills in the spot of former high tenor/falsetto vocalist Ricky Cordo.

Troutt felt blessed to hit a stage again, after a prolonged absence.

“It was a wonderful feeling and exciting to perform in front of a live audience,” he said. “The crowd gave The Majors a standing ovation after our performance, which I was told by Todd Baptista, the show’s organizer, that [we are one of] very few opening acts to receive such acknowledgement. It was greatly appreciated.” 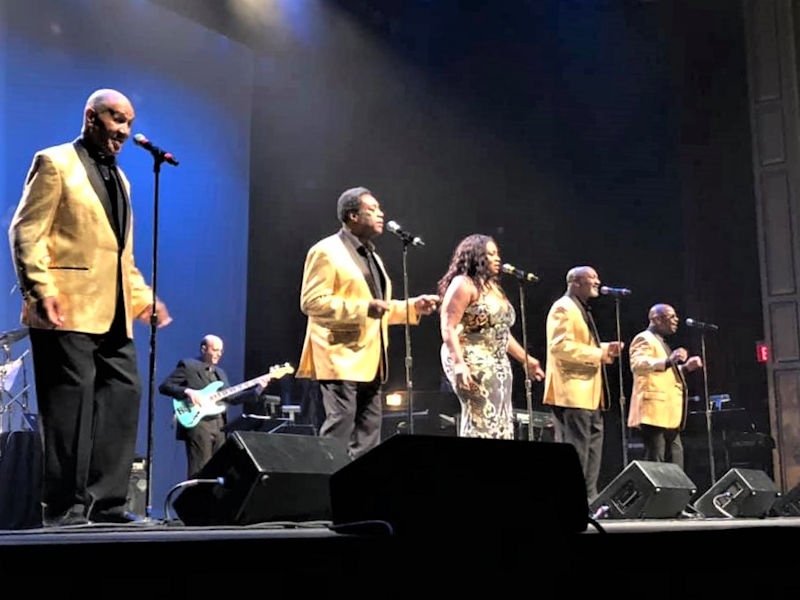 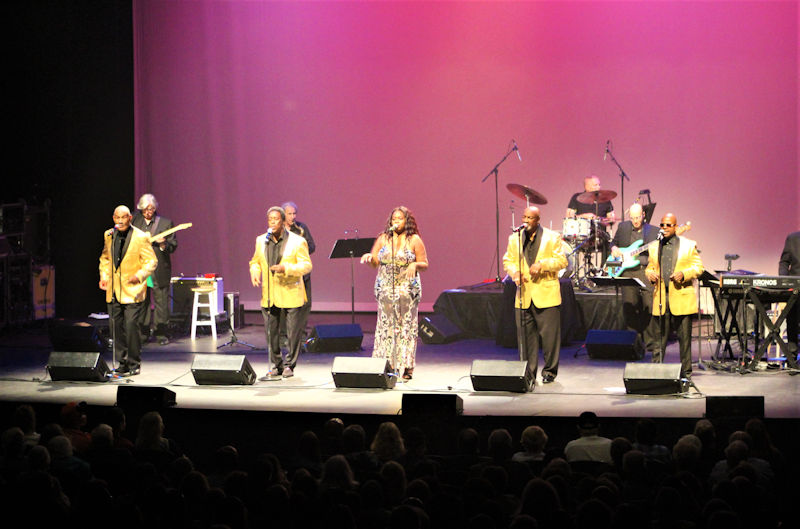 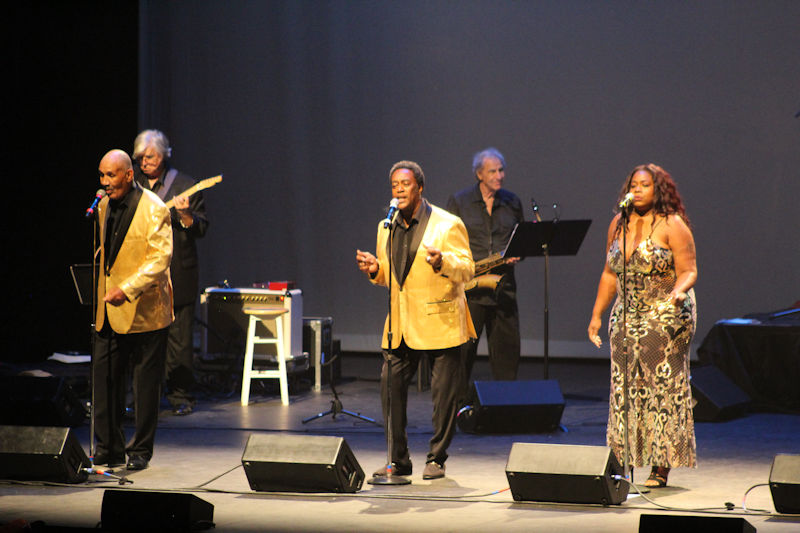 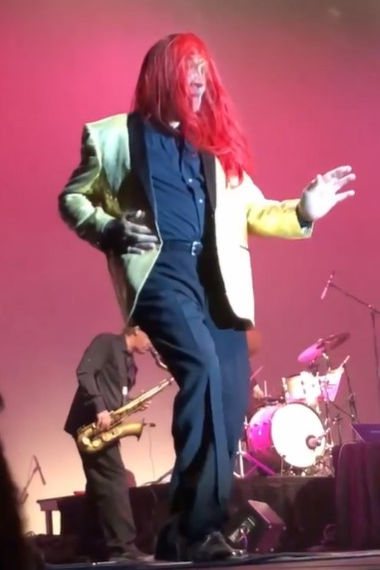 The Chantels, one of the first successful girl groups, followed The Majors, and amazingly, three of the five originals are not only living but still singing the hits. Original lead singer Arlene Smith, who left the group sixty years ago, is still around but she has retired and Jackie Landry Jackson, another original, passed in December 1997. Carrying on the music of the Chantels’ catalog – their most well-known song being 1958’s “Maybe” – are Lois Harris Powell, Sonia Goring Wilson and Renee Minus White. They say 40 is the new 30, but this trio is making 80 and 81 look like the new 30. The groups’ newest member, and primary lead, is Naomi Rudolph White, who happens to be Renee’s daughter. The Zeiterion gig marked Naomi’s first time performing with her mother and the rest of the group.

“It’s truly, truly an honor to be up here next to these beautiful queens,” she said.

Bill Clark, whose record shop in Easton a young Baptista used to regularly frequent, said the younger White was the night’s highlight for him.

“Her voice was so strong,” he said. Naomi led things off for the group with their set opener, “Look In My Eyes” but she and her mother switched mic positions when Renee took over lead duties on ‘The Plea.” The group also offered up, among others, “Well I Told You,” their 1961 answer to Ray Charles’ “Hit the Road Jack.” The group’s musical director, Hal Keshner, did his best Ray Charles’ voice as he sang along with the group while also playing keys. 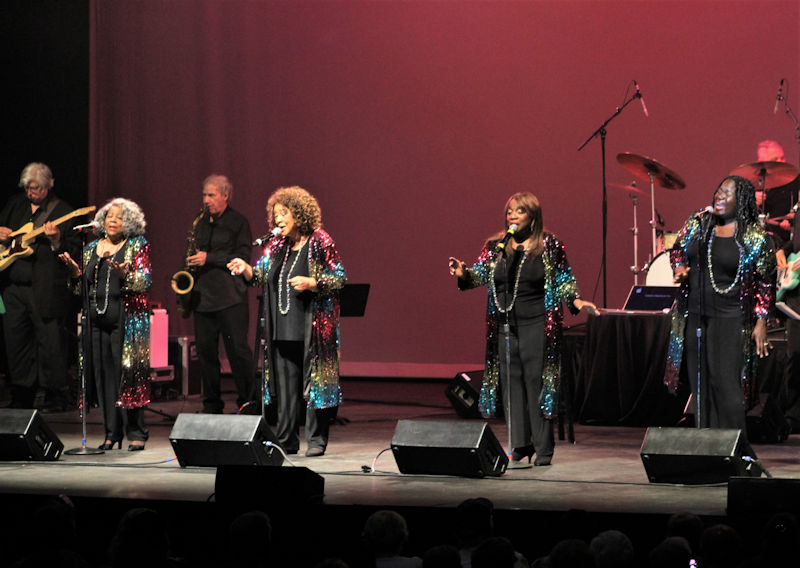 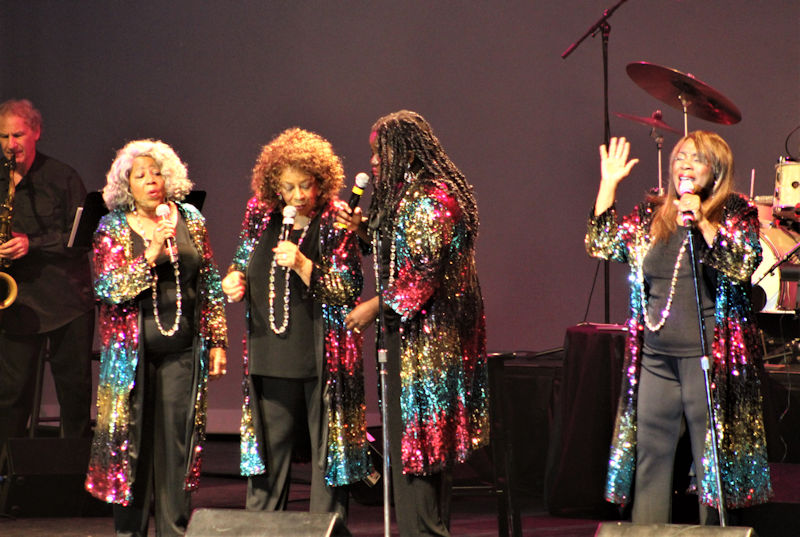 The hundreds in attendance were vetted before the show, as to their COVID 19 vaccinations or recent proof of a negative COVID result. Even still, there were no meet and greet opportunities during intermission or after the show. Noting that most of the performers are in their 70s and 80s, as well as much of the crowd, Baptista basically said it was better to err on the side of caution than to allow the normal entertainer-fan interaction.

Following intermission was the act with the most youthful energy, because he’s still a young man – 26-year-old Kid Kyle. Backed by his Harmony Masters, which consisted of bass member Bill Pron, Dickie Harmon and Rahmel McDade, Kyle began his set with the uptempo “Goody, Goody,” made famous by Frankie Lymon and The Teenagers.

Kyle said it was his group’s “first show in about two years.”

As he was noting that the New Bedford crowd always makes him feel “so warm and accepted,” a grown man, as if on cue, yelled out, “We love you Kyle.”

Asked why Kyle is so embraced, Pron told EarlyRnB.com, “Because people followed his career as a young singer.”

He added, “He is very humble as a performer. He relates to younger as well as the older crowds. I love backing him up because I know he gives all he’s got in every song. We the group are like family with him. He is just a great entertainer on stage.”

Kyle has done his homework. You can tell. You can see it in the way he holds the microphone, switches his stance mid-song, or deliberately stretches out an arm during a lyric, the way he plants his feet, like when he was delivering an impassioned phrase during his last number, “The Diary.”

He dedicated one of his numbers to the late Willie Winfield, lead singer of The Harptones, who passed away earlier this year. He said when he attended Winfield’s retirement party a couple of years ago, and both men cited “The Shrine of St. Cecillia” as their number one Harptones song, Winfield implored him to cover it.

“This one’s for you Willie,” said Kyle on Saturday night. He closed the number with a very impressive falsetto when he sang and stretched out the song’s final word – Cecillia.

If that one was for Willie, Frankie Lymon’s “Why Do Fools Fall in Love” was for the paying customers.

Returning from a two-year layoff due to the pandemic Kyle admitted all his dancing during the song, especially during the sax solo, might have had him a little winded. In normal times, when he’s regularly performing, he can do the song “three or four times for an encore,” if the audience demands it.

“I’m going to have to build back up to that,” he said. 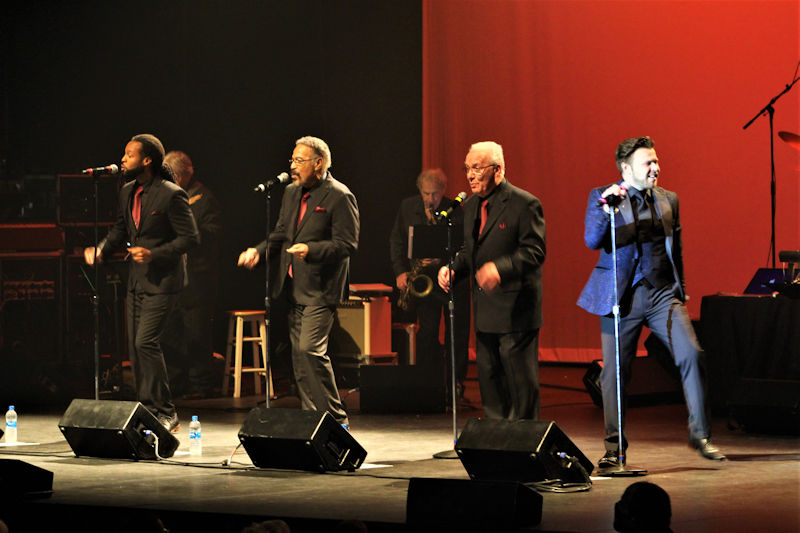 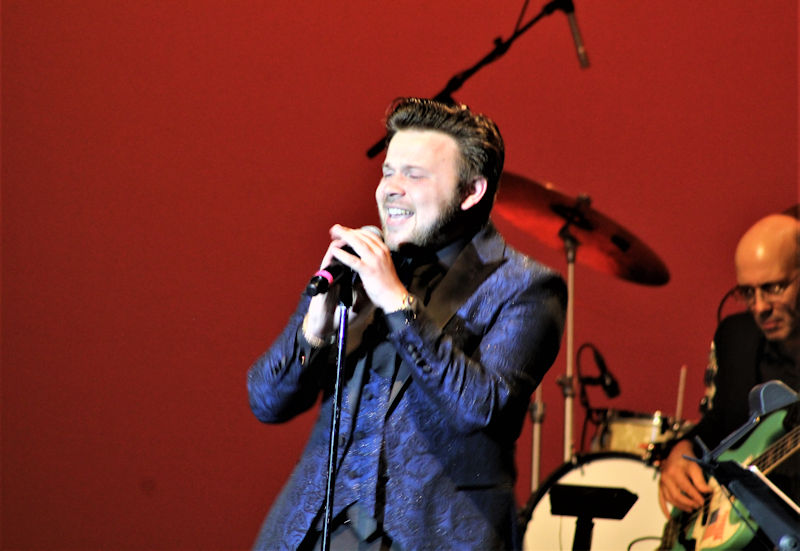 Closing out the night was The Flamingos featuring Terry Johnson. Johnson was the guitarist, vocalist, musical and vocal arranger for The Flamingos when he joined the group in the late 1950s. He was also responsible for the success of The Flamingos’ most famous song, ‘I Only Have Eyes For You,” a tune he saved for the end of the night.

Before that however, he would start things off with Nat King Cole’s “When I Fall In Love.” Johnson was the original lead on the Flamingos’ version of the song in 1960. Johnson can sing upbeat tunes but he seems most comfortable doing romantic ballads. He treated the crowd to “Mio Amore,” and “A Kiss From Your Lips.” While some performers just transition from song to song, like an album, with no talking in between, Johnson loves providing background information on songs as well as the group that earned him an induction into the Rock & Roll Hall of Fame.

When he first saw the Flamingos in concert, he was at the venue to see The Five Keys. However, before the show was over, he was envisioning himself up on stage as a Flamingo. That’s the kind of impression the young men made on him. To make a long story short, he became a Flamingo within months, as he knew Nate Nelson and the others in the group and was able to fill a position when someone left the fold.

Johnson also introduced his Flamingo group, which on this night consisted of Stan Prinston and musical director Theresa Trigg. Trigg said as a member of Johnson’s Flamingos, she has met so many stars she admired, including Shirley Alston Reeves of The Shirelles. That was a perfect segue into a medley of Shirelles’ hits that Trigg commanded, “Mama Said,” “Will You Still Love Me Tomorrow,” and “Soldier Boy.”

Johnson then slowed things down a notch with “Lovers Never Say Goodbye.” Soon after, he spoke about Doc Pomus and Mort Shuman, songwriting partners that wrote many hits for Elvis Presley as well as The Drifters. Johnson said Pomus and Shuman wrote one song for The Flamingos – “Your Other Love.”

It proved an entertaining number, and Johnson generously let Prinston sing lead. It clearly had a Drifters vibe to it and Johnson and company received plenty of cheers at the song’s conclusion.

The late Nate Nelson – who died in the mid-1980s – was the Flamingos’ lead singer and sitting in the audience during Johnson’s set was Nelson’s 26-year-old grandson, DeDawnte Vassor, of Worcester, MA. Vassor had been allowed backstage to meet with Johnson prior to the show’s start. Vassor told EarlyRnB.com it wasn’t his first vocal harmony show, but it was his first time seeing Johnson’s Flamingos do their thing.

Baptista, who also gave a pre-show talk on doo wop in general, as well as details about The Flamingos, since he’s the recent author of The Flamingos: A Complete History of the Doo-Wop Legends, also introduced Vassor at that event. He could be heard telling Vassor at the end of the night that he hoped he learned a little bit more about his grandfather, whom he didn’t know at all, because he died before Vassor was born.

Johnson’s final three songs of the night were the Sam Cooke-penned “Nobody Loves Me Like You Do,” written by Cooke for The Flamingos, “Unchained Melody,” and of course the closer, “I Only Have Eyes For You.”

Johnson’s Flamingos walked off stage but were lured back by cheering audience. Flipping the script, showing their versatility, and apparently wanting to end matters on an upbeat note, Johnson, Trigg and Prinston, backed by Jack Colombo’s Coast to Coast Band, did a cover of Jennifer Lopez’ Latin-flavored “Let’s Get Loud.” 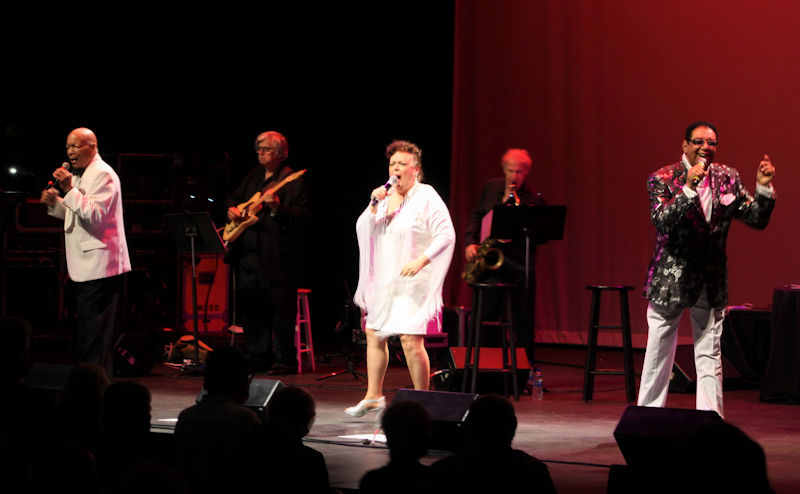 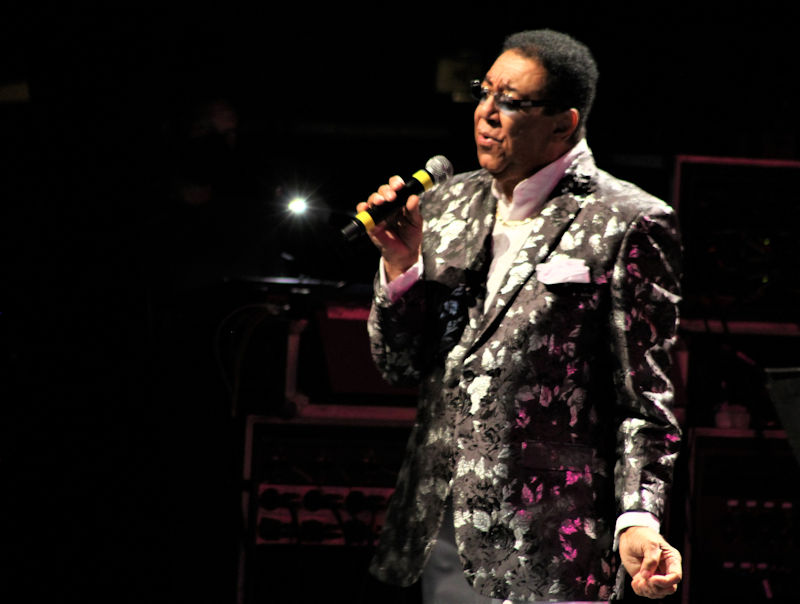 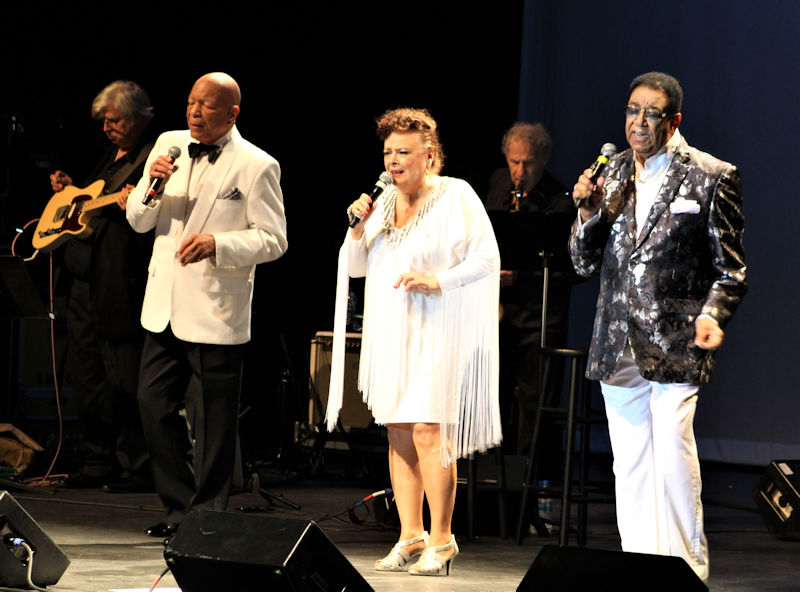 All of the night’s performers were subsequently called on stage and stood shoulder to shoulder for a sing-along of Ben E. King’s “Stand By Me.” Baptista, showing his talents have no end, even joined in on guitar. 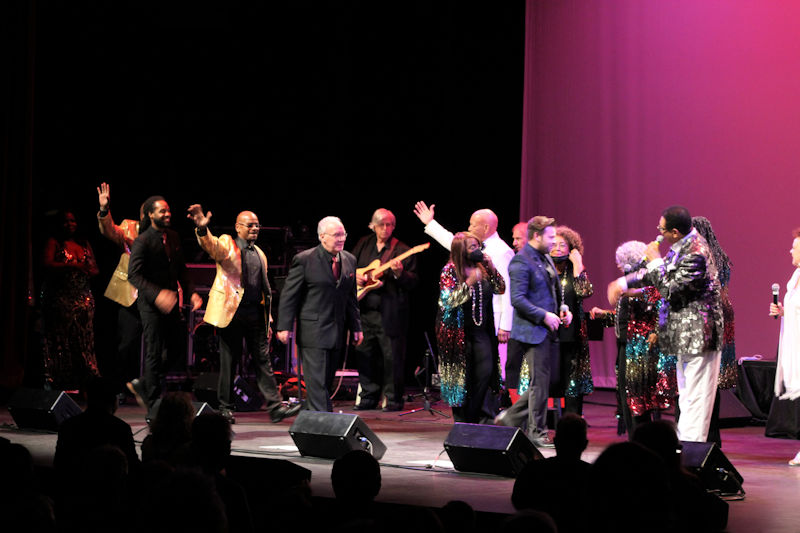 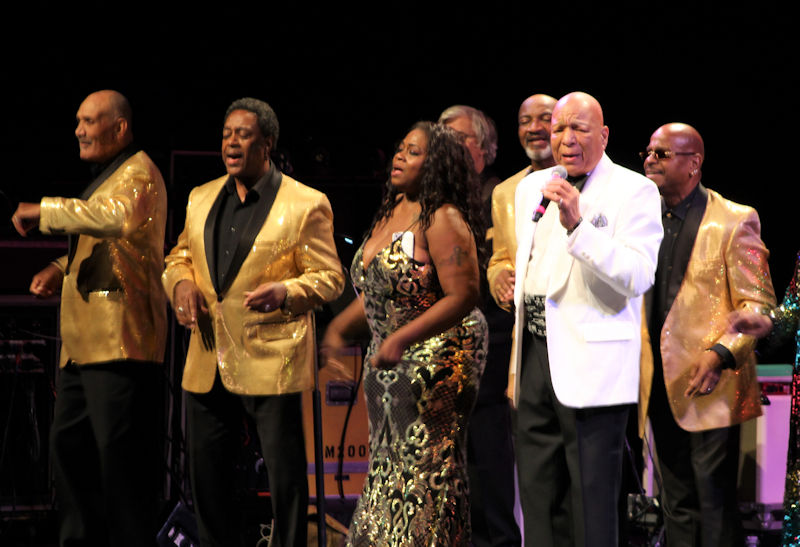 It was a beautiful end to an entertaining night. Some music fans worried about COVID and transmission may have stayed away but more will surely show their faces in the future. Older vaccinated individuals can now get booster shots, and younger age groups will be allowed the booster shot in the following weeks or months.

Saturday’s concert was originally scheduled for March of 2020, according to Baptista.

“We planned to reschedule for that August before we understood the duration of the pandemic,” he said. “Then we rescheduled for June of 2021. Once vaccinations began, we felt it was best to move our date to October, giving plenty of time for folks that wanted to be vaccinated to do just that.”

Baptista added, “I can’t say enough about Rosemary Gill and her team at the Zeiterion. They have been so supportive through a very difficult time. The numbers are always important, but for all of us to get back to doing something we love and a large group coming together, no matter if it’s 650 or 1000, that is the goal. I don’t know the exact attendance [numbers] but I was very pleased with the turnout.”

Vic Barboza, a native of Fall River, MA, showed up at the concert with his 1952 Oldsmobile Super 88 that was allowed to park front and center in front of the theater. 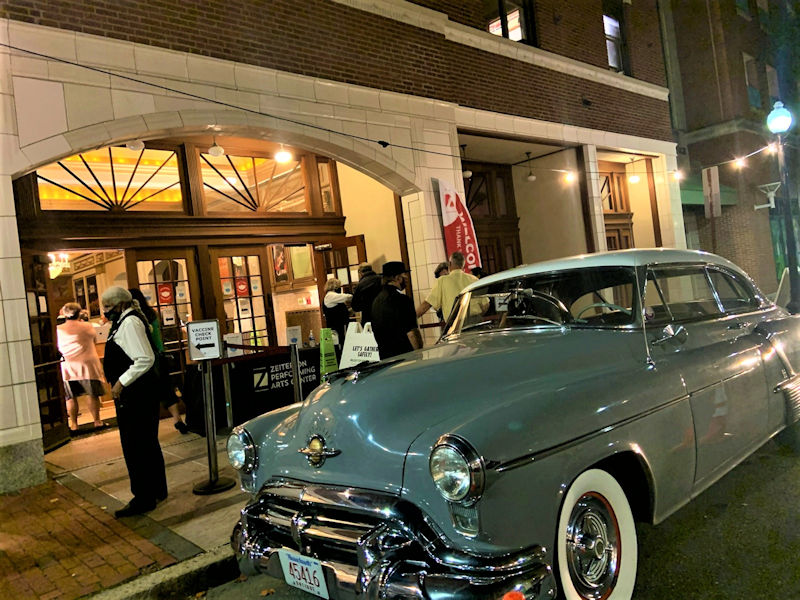 “Overall, it was great to see singers from 50-plus years ago, that are part of history, and when it all started because I used to buy their records and go to the dances,” he said. “To see these guys still performing in itself is an honor, that we can appreciate the people at this time in our life.”

Barboza, who looks younger than his 79 years, said the show “brought me back to when things were great, and values and morals were just automatic.”