There were many great early R&B/doo-wop artists in the 1950s and 1960s but Fred Parris, founder and lead singer of The Five Satins, has proven himself to be amongst the elite.

From his work with his pre-Satins group The Scarlets – “Dear One” – to the absolute gems recorded under Fred Parris and the Restless Hearts in the 1960s, never mind quality cuts in the 70s recorded with other group names, Parris has a body of work that can stack up against anyone.

However, he is best remembered as the writer and lead singer on the most famous Fred Parris recording of all time, which is also generally considered the greatest, most enduring doo-wop ballad of all time – “In the Still of the Night.” Recorded in 1956 in the basement of St. Bernadette Roman Catholic Church in New Haven, it celebrated its 65th anniversary this year.

The fact that Parris is still around to celebrate such an anniversary – when so many R&B artists of yesteryear passed on relatively early in life or weren’t blessed to make it to their mid-80s – is a beautiful thing.

To honor the man with the golden voice, EarlyRnB.com Editor-In-Chief Kirk Lang – an artist as well as a writer – decided to pick up a canvas and create an original artwork for Parris. 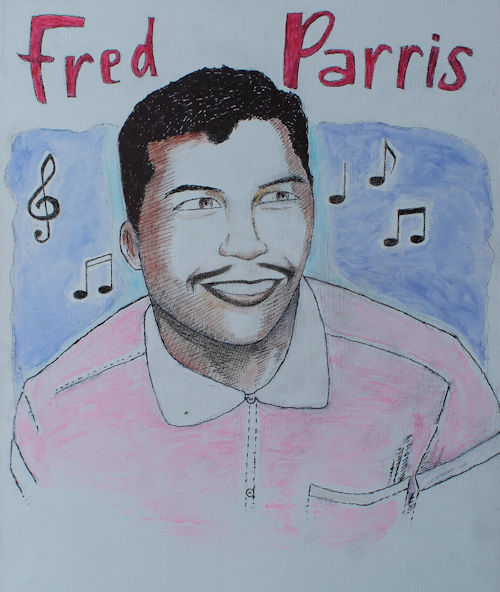 With the blessing of Parris’ wife Emma, Lang was invited to their New Haven County area residence on September 20 to surprise Parris with his visage – a mixed medium work that involved pencil, ink, illustration markers and watercolor paint – as well as a few other gifts.

Sitting at the bottom of a flight of stairs in his home’s entryway, Parris carefully unwrapped the covered artwork. Once he was done, he held it with both hands, looked at it, smiled and said, “Aww, that’s wonderful,” adding shortly afterwards, “Boy, that’s great.”

Emma Parris, sitting nearby, remarked, “That does look like you,” to which Fred replied, with perfect comedic timing and delivery, “It looks like me a long time ago.” 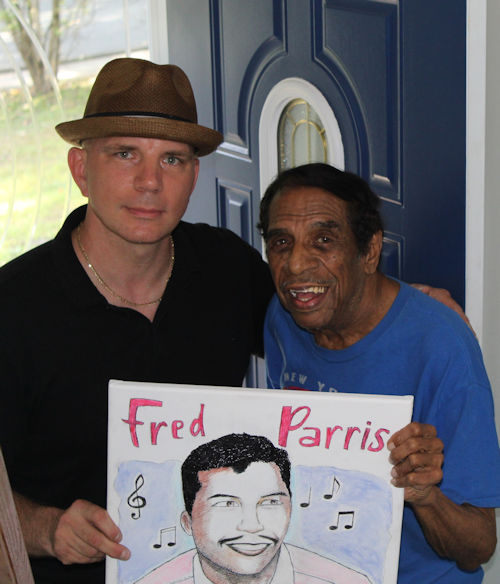 The face of The Five Satins is finding 2021 to have more than its fair share of “5”s.  Parris’ signature song is celebrating its 65th anniversary, which ends in a 5. He and Emma and are celebrating 15 years of marriage this year, which ends in a 5. And it has also been five years since Fred’s Satins’ final performance (Mohegan Sun in 2016). The number 5, in the Bible, symbolizes God’s grace, goodness and favor toward humans.

Parris has clearly been blessed. He’s in good health for an 85-year-old man but trips up and down the stairs between his living quarters and his basement music room – where he was working on a project when EarlyRnB.com visited – have become slightly more challenging on the legs. 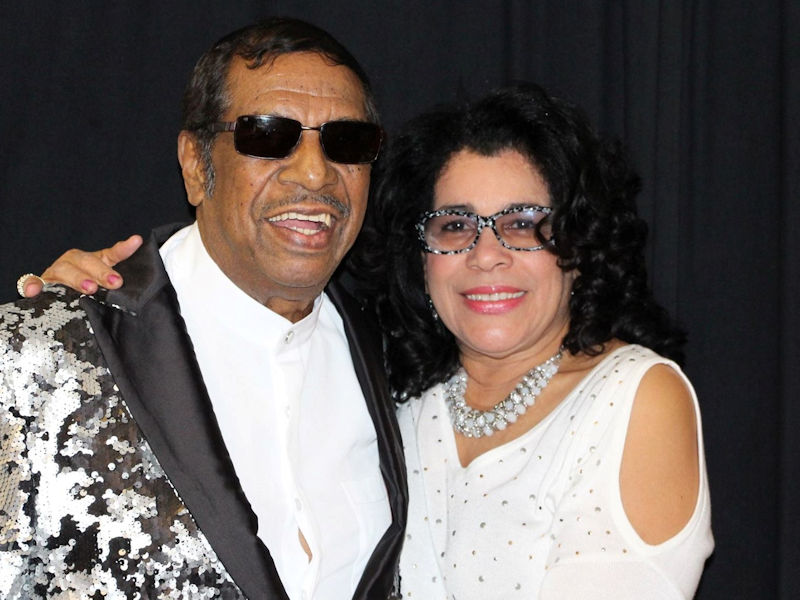 Though married for 15 years, the couple’s history goes back much farther than that. They first locked eyes at a concert back in 1971 and from there would date for several years.

Fred remembers when he first saw her at Dick Lee’s club in New Jersey.

Parris added, “I wanted to make sure I met her before the other guys in the group did.”

He did and he would follow it up by sending her directions to others places he was scheduled to appear at.

But the couple also found time to mingle outside of places with The Five Satins on the bill.

“Fred took me to my first Broadway show,” said Emma. ‘It was Shakespeare’s Two Gentlemen of Verona. It was awesome.”

The two would find the relationship had its challenges, with Emma being a New Jersey resident and Fred being a touring singer based in The Nutmeg State. It would cause them to “relax” their courtship and part ways for a time, according to Mrs. Parris. However, fate would reunite them. The second act of the love story occurred at the Kimmel Center for The Performing Arts in Philadelphia, according to Emma.

Asked what he loves about Emma, besides the outside beauty that initially attracted him, he said, “Everything” and then noted, “her temperament.”

As for Fred, Emma told EarlyRnB.com, “One of the main qualities that attracted me to Fred is that he’s honest and sincere.” 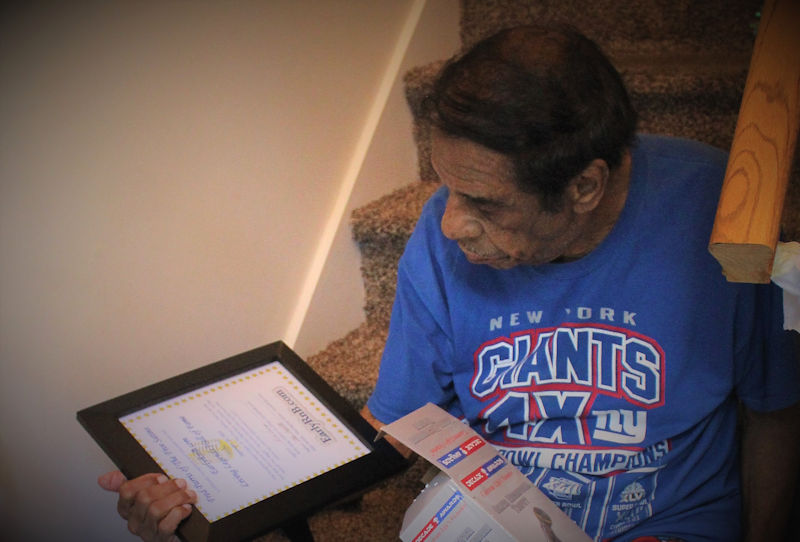 Fred receiving his trophy and certificate 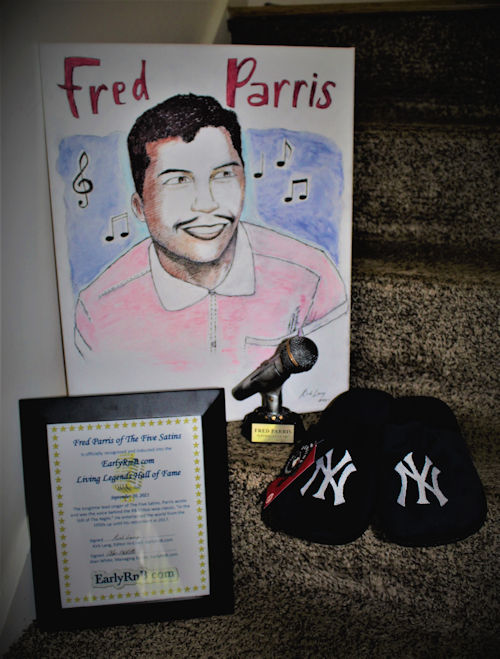 In addition to being honored with an original artwork, Fred Parris was also given a “Living Legend” microphone trophy, along with an accompanying certificate. An additional bonus gift was a pair of New York Yankees slippers, since Parris loves The Bronx Bombers. He seemed as pleased by the slippers as he was by the artwork.

An avid baseball fan, Parris also showed he’s no slouch when it comes to boxing. Queried by Lang, who covers boxing when not pursuing stories on musical artists, found Parris rattling off nicknames and hometowns of fighters within a second of their names being mentioned, whether it was Joe Louis, Thomas Hearns, Joey Giardello or Kid Gavilan, among others. Additionally, Parris provided a detail that would stump most of today’s boxing fans, unless they really study boxing history. He knew Kid Gavilan’s real name – Gerardo Gonzalez.

Parris’ memory is still sharp as a tack, because many of the details he was providing were on fighters from the 1940s and 1950s.

Besides his overall knowledge of the sport, he recalled meeting former heavyweight Jack Johnson – the first black heavyweight champion (who reigned from 1908 – 1915) – as a child when he lived on Sperry Street. His father told him to go across the street to Sperry’s Lunch to meet the champ.

Also, Parris revealed he was related to “Tiger” Ted Lowry, the only man in history to twice take Rocky Marciano the scheduled 10-round distance, which made him one of only three fighters the former heavyweight champion couldn’t knock out. Fred seemed pleasantly surprised this writer had met and knew about “Tiger” Ted Lowry, who wasn’t a world champion and boasted a very modest win-loss record. However, Lowry’s ability to withstand everything Marciano threw at him, even if it was before Rocky became champ, made Lowry a local legend in boxing circles in Connecticut.

Parris may be retired from the stage but there is still more music for the world to hear, songs that have gone unheard, that have collected dust, in the basement of the Parris home.

“Fred has well over 400 songs,” said Emma. “He is working, listening through favorites, deciding which to possibly release. He is methodical about selections. Most are his originals.” 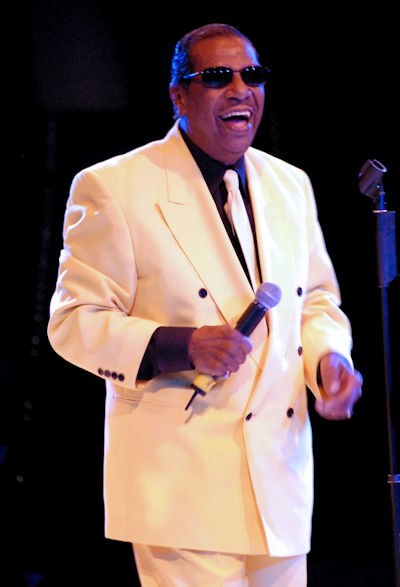 Fans of The Five Satins, fans of Parris in general, should be pleased there’s still “new” material to unveil.

Emma said someone in the industry has expressed interest in the songs and formatting it for digital and CD release. However, nothing has been set in stone.

The visit to the Parris home was not a date to interview Parris at length about his career. However, we had to ask Parris one question – but not one related to his signature song – because that’s what most interviewers always seem to focus on.

Besides “In the Still of the Night,” what is another career highlight?

“The Grammys were pretty special, a big highlight,” he said. Parris attended in 1985 as a nominee, as he had a co-writing credit on Ronnie Milsap’s “Lost in the ‘50s Tonight (In the Still of the Night),” which received a nomination for best country song.

Parris also said all the gigs he did at Madison Square Garden and Radio City Music Hall were a thrill.

“The Garden was great,” he said, “Because of the other people that were on the shows.”

“And the theaters that we did, the black theaters, were real good because there was a lot of talent on there.”

Later, Lang and Parris talked about soul legend Sam Cooke and even sang the lyrics of Cooke’s “Having A Party” together, which Fred cited as his favorite from Cooke’s catalogue.

Emma Parris, a day after the artwork presentation, relayed that “Fred enjoyed the conversations” and added that “he wasn’t expecting such a visit and that he appreciated the gifts.”

EarlyRnB.com appreciated the invite and sharing some time with him. 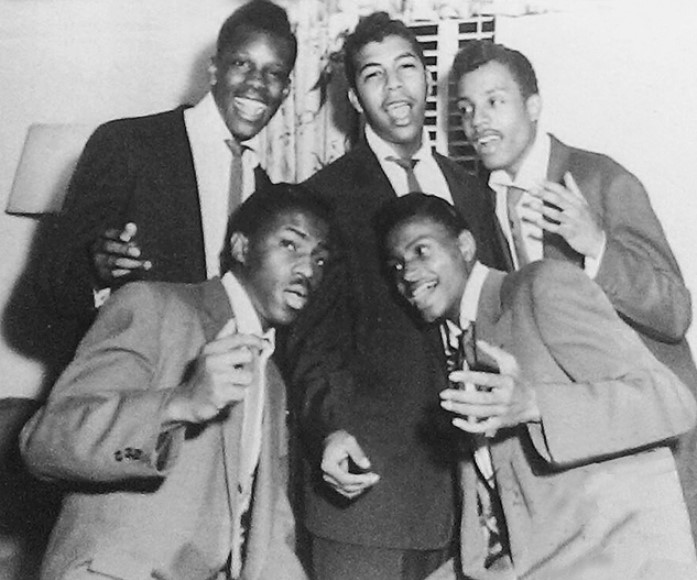 The Scarlets with Fred in the middle 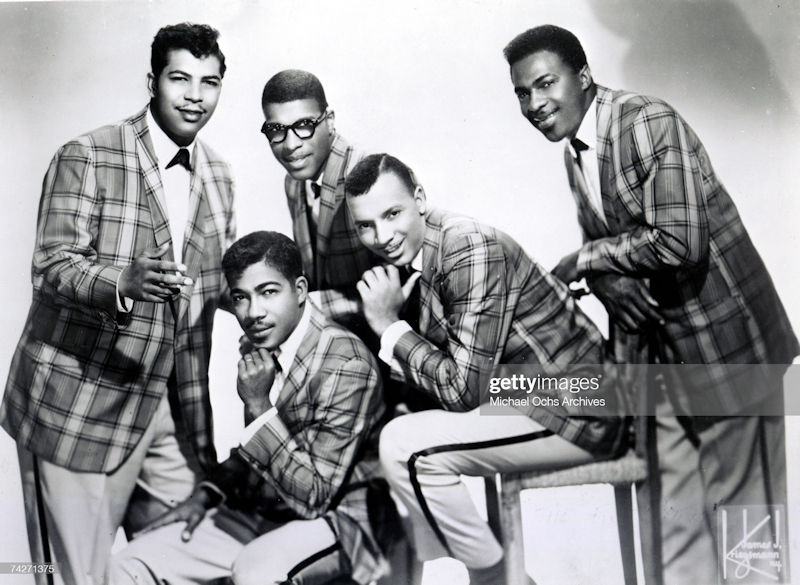 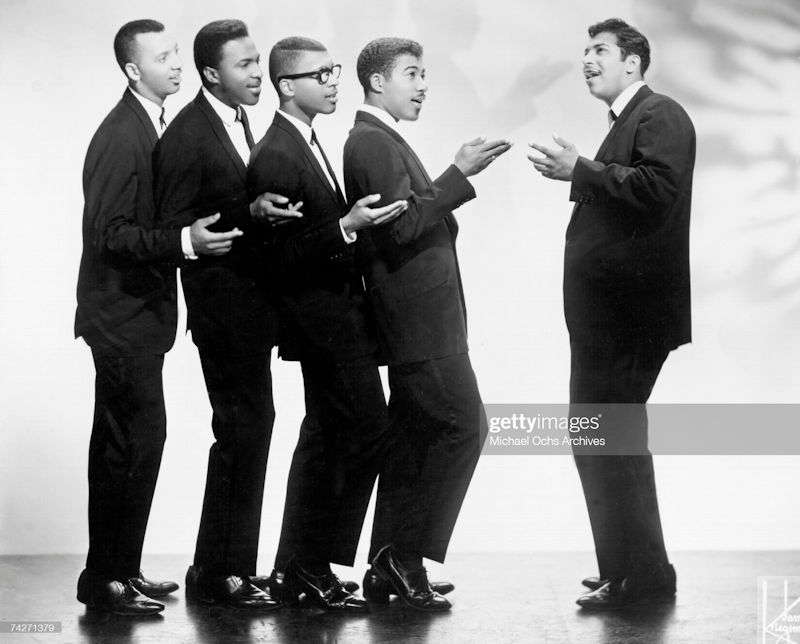