‘Willie Egan Obituary’ – by Keith Woods, from ‘Tales From The Woods’ 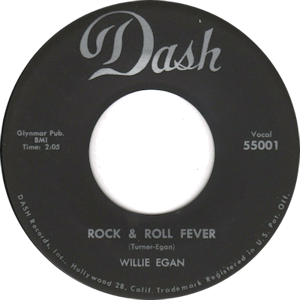 Willie Egan’s “Wow Wow”, “Wear Your Black Dress” and “Rock’n’Roll Fever” are without question classic 1950s rhythm’n’blues singles. Personally I loved the quote Spencer Leigh provided in his broadsheet obituary, “The 1956 jump blues classic “Wear Your Black Dress” came about because I almost shot her (referring to his long suffering wife). I was sitting at home with a .38 in my lap waiting for her to come home”.

He was born Willie Lee Egan on 1st October 1933 in abject poverty, in the bayou country around Minden, Louisiana, by all accounts a community so isolated they had to forge a path through the undergrowth and the swamps to reach the main road every year. Alligators were a daily hazard and although Willie luckily survived with all his body parts intact, his family were not so lucky: his father lost a hand and his brother a foot. At the age of nine the lad was packed off to live with his grandmother in Los Angeles. His uncle had a piano on the front porch and he was soon fascinated by it, unable to keep his hands from the keys. His young ears were picking up the urban sounds he heard around him, most notably Amos Milburn and Hadda Brooks.

Come 1949 Willie would find himself discovered and signed to Elko records. His first release under the name of Little Willie Egan, “Dream House Blues”, was named after the club in which he played. No further recordings appeared for several years until he teamed up with Lloyd Rowe for “Don’t Know Where She Went” in 1955 for the Mambo label. For the next cut he was by then solo coming out this time as Willie Eggins and his orchestra for the aforementioned “Wow Wow” which generated local interest.

Egan played piano on recordings by The Squires and saxophonist Lorenzo Holden before tracks under his own name; the Fats Domino influenced “Sometimes I Wonder” (1955) and “Rock’n’Roll Fever” (1958) before serving time as “Johnny” in Man/in & Johnny with Marvin Phillips cutting “Baby, Bay, Baby” (1958), “I’m Tired Of Being Alone” (1962) and a second helping of the big Marvin & Johnny hit of several years earlier which Willie put out with Marvin for the Swingin’ Label in 1962.

By the mid-sixties Willie was working again as a solo act with sadly little reward when a club burned down and destroyed his uninsured equipment. He gave up the music business entirely, choosing regular employment as a hospital orderly.

As with so many near forgotten heroes of roots music it was Europe that came to the rescue. The UK company Krazy Kat put together a collection of Egan’s singles, “Rock’n’Roll Fever” (1982). False information suggested that he was dead but Ted Carroll, founder of the London based label Ace Records discovered him unemployed and living in pretty desperate conditions. He booked Egan for a rhythm’n’blues extravaganza at the Electric Ballroom, Camden Town which was recorded for a live album. This was followed in 1984 by a studio album “Going Back to Louisiana” backed up by the London band Juice On The Loose.