‘June Pointer Obituary’ – by Keith Woods, from ‘Tales From The Woods’

JUNE POINTER the youngest Pointer Sister was born 30 November 1953 in Oakland, California. Both her parents were ministers at the West Oakland Church Of God. It was there that June first sang in the church choir alongside her five sisters. In her teens along with sister Bonnie they formed a singing duo Pointers – A Pair, slowly gaining momentum around the San Francisco club circuit.

In 1969 Anita joined June and Bonnie to form The Pointer Sisters, initially involved as studio backing singers for the likes of Tower Of Power, Taj Mahal, and Boz Scaggs.

Jerry Wexler of Atlantic Records saw them singing backing vocals for Elvin Bishop in a club on Sunset Strip, Los Angeles and signed them to the label. Wexler sent them to Malaco studios in Jackson, Mississippi. The material laid down failed to impress the Atlantic hierarchy, so after two failed R&B’ish singles the girls quickly got out of their contract.

In 1973 Ruth joined her sisters completing this quartet. They teamed up with San Franciscan producer Dave Rubinson, who attained the girls a new recording contract with ABC/Blue Thumb Records. The group released their debut self-titled album in 1973, from where Allen Toussaints ‘Yes We Can Can’ was lifted and became a sizeable R&B hit. 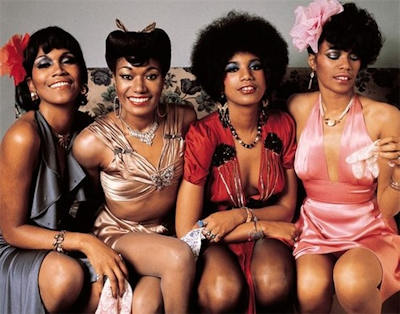 The group cultivated a slick forties era, updating versions of nostalgic swing tunes, along with vintage outfits, perfectly matched sense of phrasing and syncopation saw them rapidly ascend the super stardom ladder. In 1974 they won a Grammy for the best country vocal performance with ‘Fairytale’. International hits followed in rapid succession, ‘Fire’, ‘Slowhand’, ‘Should I Do It’, ‘Automatic’, ‘Jump (For My Love)’, ‘He’s So Shy’, ‘I Need Your Love’, and ‘I’m So Excited’, ‘ Neutron Dance’, knocking up gold, and platinum Grammys along the way.

Surprisingly the group only once reached number one R&B, in 1974 with ‘How Long (Betcha Got A Chick On The Side)’. The Pointers won world wide acceptance for their ability to excel in a variety of styles from pop, to soul, to jazz, to funk and even country, and were equally at home performing in Nashville’s country music mecca, The Grand Old Opry through to the San Francisco’s Opera House.

For thirty seven years June toured the world, recording some seventeen albums, singing for Presidents, Prime Ministers, appearing in movies, on Broadway and all major US national television shows.

Drug problems forced June Pointer out of the group, but she did record two solo albums without much success.

In June 2004 she was charged with cocaine possession and other drug offences. She passed away on the 11th April 2006 from cancer.