‘Judy Clay Obituary’ – by Keith Woods, from ‘Tales From The Woods’ 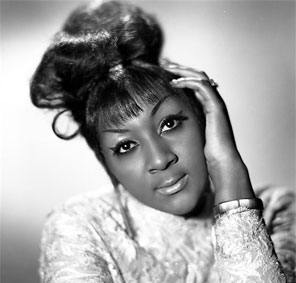 It was with great sadness, I learnt of the latest loss to our music, the death of Judy Clay on July 19 2001 aged 62, from complications following a car accident.

One of my most played 45s is a little gem on Atlantic from 1969, a duet with Billy Vera ’Reaching For The Moon’ a gospel influenced cracker, alas failing to chart anywhere.

Judith Guions (Judy Clay) was born September 12 1938 in St Paul, North Carolina. Judith, as with many of the great soul artists, began singing in church at a very early age. Moving to Brooklyn, New York via Fayetteville, North Carolina with her grandmother in the early fifties, she soon joined a church choir that also sang on Sunday night radio broadcasts. Returning to North Carolina the young Judith longed to return to New York. She did, staying with a girl friend under the watchful eye of a church minister. Lee Warrick Drinkard of the Drinkard Singers adopted her and, from the age of 14, became a regular member of the family gospel group in 1953 (the group was originally formed in 1938). Judith was in good company – Cissy Houston, Dionne Warwick, Dee Dee Warwick, plus other family members. Judith regularly shared lead vocal duties with the other girls. Three Drinkard Singers albums were released in the fifties which feature Judy. The Drinkards name was dropped as the girls pursued a secular path, which lead to the formation of a unique team of recording session back up singers – Cissy, Dee Dee, Dionne, and Judy. What a line up. Their first session was with Ronnie Hawkins and the Hawks. Incidentally after subsequent changes the group emerged as The Sweet Inspirations. 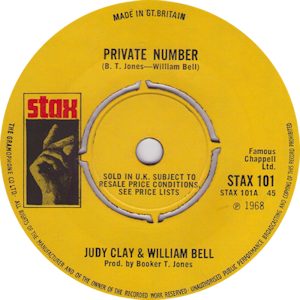 In the early 60’s Judith becomes Judy Clay, and begins her own, if not too successful solo career, with releases in 1961/62 on Ember, 1963 Lavette, 1964/65 Scepter. Her next port of call in 1967 was to Stax in Memphis, via Atlantic Records, where she recorded ‘You Can’t Run Away From Your Heart’. A return to New York, and with Atlantic Records she finally makes the charts in 1968 with ‘Storybook Children’ and ‘Country Girl – City Man’ both duets with Billy Vera. No more success for the duo finds Judy back at Stax. A chance meeting with William Bell after Judy had finished a recording session results in her biggest chart success, 17 R&B, 75 US Pop, 8 UK Pop in late 1968, a duet with William Bell – ‘Private Number’ which was originally written with Otis Redding and Carla Thomas in mind. A solo outing ‘Bed of Roses’ failed, but another duet with William Bell ‘My Baby Specialises’ charted. After another solo release ‘Sister Pitiful’ failed to chart, it was back to Atlantic to cut my favourite, with Billy Vera, ‘Reachin’ For The Moon’, which was recorded for Atlantic at the Fame studio (was everything recorded there?) down in Muscle Shoals. Alas this gem was non-charting. She did follow this up with a solo R&B Hit in 1969 ‘Greatest Love’, which was recorded at the ‘Reachin’ session. Judy continued during the 70s as an in demand session singer, but major surgery in the late 70s forced her into retirement. A brief return in the eighties was short lived, finally giving up the music business for her family and home life, although she occasionally made an odd excursion into gospel work.