‘Etta James Obituary’ – by Keith Woods, from ‘Tales From The Woods’ 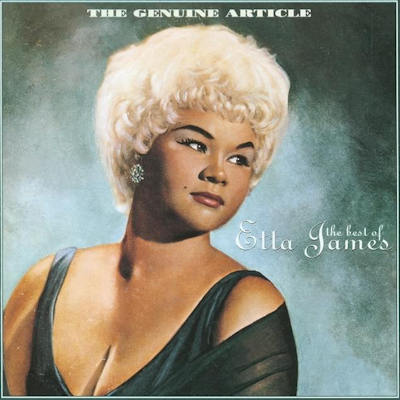 ‘Tales From The Woods’ raises a glass and says farewell to Rhythm & Blues/Soul/Rock’n’Roll singer, the great Etta James who died on 20th January 2012 just five days short of her 74th birthday.

Jamesetta Hawkins was born on 25th January 1938 to a 14 year old mother Dorothy and an unknown white father, although in articles and interviews she always maintained it was the pool shark Minnesota Fats Wanderone. Raised in Los Angeles by adoptive parents, from the age of five singing gospel in a local church, in later years she would very much acknowledge the influence of choir-master James Earl Hines.

Upon the death of her adoptive mother, her dysfunctional blood parent re-entered her life at the pivotal age of 12. It could hardly have been worse; shipping her off to San Francisco, where Dorothy pursued her vocation as a hustler with little regard for her new found responsibilities. When young Etta returned home from school there was no sign of her mother, so she was pretty much left to fend for herself with pretty much predictable results; drinking, violence, pot smoking and substance abuse became the order of the day. Etta no doubt blamed her Mother for all her self-destructive traits and the relationship remained combative for decades to follow.

Etta knew the only way out for her was to exploit “her god given talent to sing” forming a trio with two other girl school friends The Creolettes. It was this trio that auditioned for Johnny Otis. Naturally hugely impressed with the 15 year old Etta, he offered to take her to Los Angeles to record her. She lied to Johnny saying she was 18 but Otis needed a little more convincing, asking for permission from her mother to make the trip. Here accounts vary; some say Etta pretended to phone her mother in Otis’ presence, conducting an imaginary conversation with her absent mother. The other account is that she went home and forged her signature but, whichever version is true, no permission could have been granted as mummy was banged up in prison at the time.

Roll With Me Henry, which was retitled The Wallflower for Modern Records who thought the original title far too explicit, her forename shortened to Etta, the record sailed up the R&B charts to reach the no 1 slot in 1955. Its follow up Good Rockin’ Daddy peaked at 12 and the young lady was indeed on her way. Nationwide tours in the company of Johnny Guitar Watson, Ike & Tina Turner, and Little Richard where, by her own accounts, witnessed more than a little debauchery.

She would not see any more hits throughout the remainder of the fifties. 1959 would see Etta sign for legendary Chicago Blues Label Chess which, as the sixties entered, began to christen her Queen Of Soul before soul music as a genre had really been put into common usage. She was soon notching up R&B chart hits such as All I Could Do Was Cry, If I Can’t Have You and one of her most famous recordings At Last, the latter bringing a full bluesy string accompaniment to her powerful blistering soul drenched vocals. A 1963 album Etta Rocks The House was recorded live at the New Era Club in Nashville, Tennessee.

1967 would see the guvnor of Chess records, Leonard Chess, dispatching Etta to Alabama to record at Fame studios, resulting in one of Soul music’s finest moments, the defining ballad of insane jealousy I’d Rather Go Blind which amazingly was a B side, the A side being the powerful Tell Mama. By now the influence of Etta James could be heard in numerous other soul and rock singers including Candi Staton and arguably more obviously Janis Joplin.

Despite her considerable success she could not escape her own self-destructiveness. Addicted to heroin and gangster men she lived a criminal lifestyle and found herself jailed on several occasions. In 1971 along with her husband Artis Mills she was arrested on a drugs charge. Her husband took the rap and served ten years; upon his release they were reunited.

Etta was never to enjoy another major hit in her native country. No doubt the passion, the gut-wrenching raw soul was too much for Joe Public, just a little too authentic, or to use Etta’s own words “pour out all that bitch shit inside of me.” The 1974 album Come A Little Closer was recorded whilst she was in rehab at a psychiatric hospital. Failing to gain mass recognition soul and blues fans remained, like the critics, totally devoted. A move to Warner Brothers proved artistically fruitful which provided a couple of albums that remain favourites of us here at the turntables of Tales From The Woods Seven Year Itch [1989] and Sticking To My Guns [1980]. During the nineties I was able to witness the lady in concert a couple of times in relatively quick succession at Kentish Town & Country Club in those golden days when the venue now renamed the Forum was London’s spiritual home of all music of the roots kind.

In the intervening years Etta sang Rock’n’Roll Music in the film celebrating the 60th birthday of the song’s creator Chuck Berry, the man who wrote the soundtrack to so many of our lives, Hail Hail Rock n Roll [1982]. Two years later she sang at the opening ceremony of the Los Angeles Olympics, opened stadium dates for the Rolling Stones in the US and was inducted into the Rock’n’Roll Hall Of Fame in 1993. Three years later in 1996 unexpectedly she found herself in the UK charts with a song she cut decades before I Just Want To Make Love To You which was featured in a diet coke advert. Around the same period she was pricking up the ears of the jazz audience with a series of jazz albums commencing with the homage to Billie Holiday Mystery Lady.

Over the years she collected six Grammy awards, along with a star on the Hollywood walk of fame. Having finally conquered her drug addiction she set about losing her considerable weight which by 2002 had ballooned to 400 pounds; going through gastric bypass surgery she shed some 200 pounds.

The appalling film Cadillac Records (to say it was a heavily fictionalised account of the history of Chess Records would be an understatement) brought James’ name to a much wider audience via Beyonce’s appearance as Etta.

Quite why the first black president of the United States invited Beyonce to sing Etta’s song At Last at his inauguration and did not ask the originator of the song herself one can only speculate; perhaps Etta would have been too raw, too authentic for the president’s household.

In 1995 Etta’s no holds barred autobiography Rage To Survive was published. In the week prior to her death her swansong album The Dreamer [2011] was made album of the week by BBC Radio 2.

The official cause of death was given as leukaemia but her health complications were many.