‘Anna King Obituary’ – by Keith Woods, from ‘Tales From The Woods’ 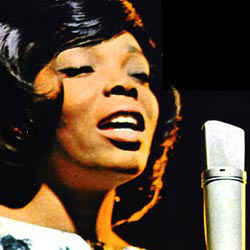 Born Anna Dolores King in Philadelphia 9 December 1937. Influenced by her minister grandmother, Anna started singing in church from the age of six years. When she was twelve she joined her first gospel group, Youth For Christ. Through her teens and early twenties she was involved with various gospel assemblies. It was when she was singing with the group, the True Light Gospel Singers, that Luther Dixon, Scepter-Wand records, who was scouting for a female singer to record, spotted her talent, and offered her a contract. It took a lot of persuading by Dixon for Anna to move over to secular singing, which in turn lead to her first recording and release in April 1961, ‘In Between Tears’ / ‘So In Love With You’, on Malibu 1020, distributed by Scepter-Wand.

On the strength of this first release she joined various Scepter-Wand package tours, which featured the likes of Chuck Jackson, and the Shirelles. Returning to the studio in 1962 she cut for Luther Dixon’s Ludix label, ‘You Don’t Love Me Anymore’ / ‘The Big Change’. Her big chance came when James Brown was looking for a female replacement for Tammi Terrell. Anna auditioned and became a member of his revue. James Brown was contracted to Smash records, so it was only natural that Anna would release her material on the label. The gospel influenced, James Brown written wailer, ‘If Somebody Told You’ cut in 1963 reached both R&B and pop charts.

Her next two singles were recorded at Bell Studios New York in January 1964. ‘Baby Baby Baby’, a duet with Bobby Byrd, which became an R&B smash, and the soul classic, ‘Make Up Your Mind’, b/w ‘If You Don’t Think’, was to be her last chart appearance. Following on from this was the highly acclaimed James Brown produced album, BACK TO SOUL. Anna left the James Brown revue in late 1964 to go her own way, although still contracted to him, releasing just the two more Smash singles ‘Come On Home’/’Sittin’ In The Dark’ and ‘That’s When I Cry’ / ‘Tennessee Waltz’.

Finally free from Brown, she digs back at the man with an answer record to ‘Papa’s Got A Brand New Bag’, titled, ‘Mama’s Got A Bag Of Her Own’ b/w ‘Sally’, End records. This was to be her last secular recording. She formed a group with ex James Brown’s drummer, Sam Lathan, spending a year on the road, sharing the bill with many major soul artists. She retired from the music business, which so happens only lasted a year, as out of the blue, Anna got a call that Duke Ellington wanted her as singer for his sacred concerts. With Ellington she returned to her roots and first love gospel music.

After an eighteen month stint with Ellington, she joined up with the mighty gospel group the Brockington Choral Ensemble, and the group’s various out takes, where she went on to record, for amongst many labels, Arctic and Hob. Around 1976 Anna, after becoming a minister, basically gave up singing completely, apart from the odd performance, as God’s work, and preaching engagements became a full time occupation. She was still ministering up until her death, in Philadelphia on 21 October 2002.